Named as the Global City of the Future by McKinsey Quarterly, Vijayawada is one of the most dynamic cities in the South India. Deriving its name from Bezwada, Vijayawada is the third largest city in Andhra Pradesh. The city also boasts of the second biggest railway junction in India, making it a crucial connectivity hub for Southern India’s entire railway network. Located on the banks of Krishna River and about a distance of 282 Kilometers from the state capital, Hyderabad, Vijayawada is touted as the Business Capital of Andhra Pradesh given its well connected network through railways and roads. The city boasts of the unbeatable mix of agriculture and industry backing the economy. The industrial estate at Kondapalli serves as the industrial nerve center of the city and houses about 800 industrial units. Bordered by Krishna on the east and Badameru river on the north and the mildly hilly topography of the city makes it ideal not just for agriculture but also for peaceful habitation. The city is also known for the notoriously scorching summers and spicy cuisine which leaves an unforgettable tingling aftertaste.

Bezwada, the original name of Vijayawada, means the place of victory bears an interesting trail of stories. As per a certain legend, this is the place that Goddess Durga rested post assassinating the demon. As per a different folklore, the Indrakiladri hills is the place where Lord Shiva blessed Arjuna. The name Bezwada has yet another mysterious story which claims that Goddess Krishaveni (Krishna River) requested Arjuna to build a way for her to reach Bay of Bengal and thus Arjuna carved a hole (Bejjam) through the hills which was called as the Bejamwada and later acquired the name Bezwada.

The history of Vijayawada is as illustrious and interesting as the folklore behind its nomenclature. This place finds mention in the Stone Age inscriptions found on the bank of Krishna River. This city has been ruled by a series of dynasties. In the 5th and 6th Century, it was a crucial center for the Vishnukudin dynasty, followed by the Badami Chalukyas who made Vijayawada as the headquarter. Vijayawada also finds mentions in Hiuen Tsang’s travelogue as Buddhism was at its peak around 639 AD. The limits of this city got re-defined when kings of the Eastern Ganga Dynasty marched upto the Godavari River and established a town named Vijay Bahuda meaning Return after Winning, which formally became the city of Vijayawada. Under the British rule, Vijayawada underwent an infrastructure revamp with the elaborate rail and road network being built.

One of the crucial aspects of Vijayawada is the geographical positioning and the topography of the city. It is about 39 feet above sea level with medium and small hillocks interspersed with plain lands. Krishna River is a dominant feature of the geography and imparts a fertile soil base to the area. On the west, the Indrakiladri hills stand, and the Eastern Ghats impart the slightly undulating landscape which is smoothened out by the Krishna river running right across the city. Vijayawada is the only city in the world bordered by two rivers and with three canals running through the city. The Prakasham Barrage reservoir, built under the British rule, has Eluru, Bandar and Ryves canals originating from it. Buckingham canal originates from the southern part of the reservoir. The western side of the city is flanked by the Kondapalli forest spread out over an area of 30,000 acres of land which provides the necessary green cover to the city. Vijayawada experiences scorching summer heat and mild winters. The city is blessed by the Rain Gods and receives abundant rainfall from both South-West and North-East monsoon winds.

The economy of Vijayawada has a strong foundation with abundant agriculture and industrial setup which justifies the city being titled as the Commercial Capital of Andhra Pradesh. The fertile lands of Vijayawada produce rice, sugarcane and mango in abundance. The Jawahar Lal Nehru Auto Nagar Industrial Estate in the city is one of the largest automobile industrial hubs in Asia. The hub mainly focuses on manufacturing automobile parts and accessories. This Estate not only employs a massive population of the city but also supports labour force from neighboring states. Another booming business of the city is retail of garments. Areas around Old city, mainly Besant Road and Governor Pet are famous for the wholesale garment sale. Industrial estate in Kondapalli, spread out over 450 acres, focuses on power plants and other energy generating units. Given it is one of the most well developed and massively connected cities in the South, property prices soar in Vijayawada.

A major reason for it being a commercial hub is the strong transportation network Vijayawada enjoys. Besides the main railway station, which is also the Junction, Vijayawada has seven other stations to cater to the railway network. Gannavaram Airport, situated at a distance of 20 Kilometers from the city center has domestic air services to all major cities in the country. Two national highways cross the city connecting it to Mumbai and Kolkata. Apart from that it has a plethora of State Highways across the city. 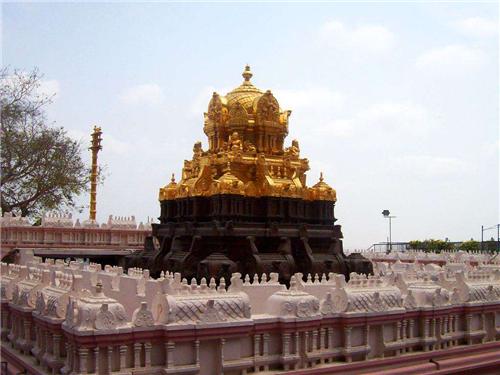 The rich historical legacy of the city has led to the developments of many relics of the past that serve as tourism attractions of the city. Additionally the hilly topography provides numerous spots for tourists to marvel at. Vijayawada has numerous temples, mosques, churches, caves and islands scattered throughout the city. It boasts of about sixty parks around the city. Some of the common attractions are the Kanaka Durga Temple, Gundala Mata Shrine, Mogalarajapuram Caves, Bhavani Island, Prakasham Barrage, Victoria Museum and Rajiv Gandhi Park. Vijayawada is an interesting place to visit to understand how the dynamism of the modern development has flourished with the rich culture. If that is not all, Vijayawada is also known as the Cine Rajdhani and is a crucial center for box-office reviews for Telugu films. It has five malls, 45 theatres, and about three multiplexes.