Speaking of food, Vijayawada has a mouthful to offer to one and all. Anyone visiting Vijayawada should not miss out on the traditional Andhra food, which is known to be one of the spiciest and richest foods in the world. The unique feature of the cuisine is the abundant use of spices and chillies in the curries. Chilies and tamarind provide the base for all curries in Andhra food which never fails to immerse your senses in the tangy taste. The staple diet of the people of Vijayawada constitutes of rice. 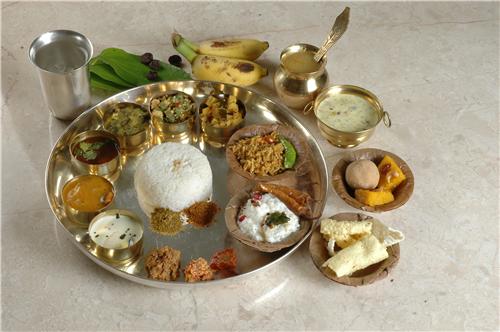 A Hearty Meal in Vijayawada

A conventional Andhra meal is laid out on a banana leaf and is best enjoyed sitting on a floor mat. The dishes are served directly on the banana leaf. Any meal is incomplete without a touch of pickle and a serving of Chutney or more commonly called Patchadi.  Mango pickle also known as Avakaya is a trademark of Andhra cuisine. Rice is used in multifarious ways to prepare Attu (Dosai), idly, and many more variations. Pulihara or Tamarind rice is a spicy preparation of rice without which an Andhra meal is incomplete. It is usually enjoyed with a serving of Sambhar or other lentil preparations.

Curries usually constitute of vegetables, meat and sea food. The curries uphold the piquant flavor savored in Andhra food. Gonghura, a kind of spicy sour leaf, is used in most curries which impart the sharp flavor to it. It is very common in most lentil preparations and also in pickles of Andhra Pradesh. Ullava Charu is a famous treat loved by Andhra food connoisseurs and is best enjoyed with a serving of curd. For non-vegetarians, dishes like Gonghura mutton, Bommidailapulusu, Natukodi chicken are recommended. Sea food like prawns and fishes are also prevalent in Vijayawada. Breakfast mainly constitutes of Idly, Dosai, Pesarattu, Garre and Upma eaten along with Patchadi (Chutney).

If you thought Andhra food was all about fiery tangy flavors then you would be surprised that Vijayawada is also known for its melt-in-the-mouth sweets. Delicacies like Laddu, Boorelu, Bobbatlu, Kajjikayalu and Ariselu are a common favorite of the people of Vijayawada.

After a day’s hard work, the people of Vijayawada indulge in evening snack on the street side stalls. Vijayawada has its own version of the South Indian Coffee that is much admired by anyone who has had the chance of tasting it. The snacks mainly constitute of fried delicacies namely Mirapakya Bajji, Kaarappoosa, Chekkalu, Guggillu, Bondi, Bondaalu and Arratikaya Bajji.

And Vijayawada isn’t just about Andhra food, the place has a lot to offer in terms of Western, Italian and Chinese cuisines. Vijayawada is an upcoming city in the landscape of South India and keeps up with the varied needs of the masses in terms of food preferences. If you are looking for the authentic taste of Hyderabadi biriyani Hyderabad House located at Tikkle Road. The city also has a plethora of options in terms of youthful places to enjoy a drink like the Blue Fox Bar and Restaurant and Tycoons. Another popular restaurant is Silver Spoon Restaurant in Gurunanak Colony famous for its inexpensive options.

The city abounds in coffee bars and restaurants to cater to the youth of the city. The Seven Days Café located in Governor Pet is a well known coffee house and also have snacking options in terms of cakes and pizzas. Minerva Coffee Shop is another favorite which specializes in South Indian breakfast options and Vijayawada’s very own filter coffee. In keeping up with the demand for fast food, the city also has chains of Pizza Huts, KFCs and Café Coffee Days.