Geographically, Vijayawada is located at 16.52° North Latitude 80.62° East Longitude. The topography of the city is extremely crucial to the kind of habitation seen in the city. Vijayawada is at 39 feet above sea level. Being located right at the edge of the Eastern Ghats, Vijayawada’s landscape is interspersed with low elevation undulating hills towards the Northern, North-Western, and South-Western part and extensive plain areas  lying in the Central, South-Western and North-Western parts of the city. 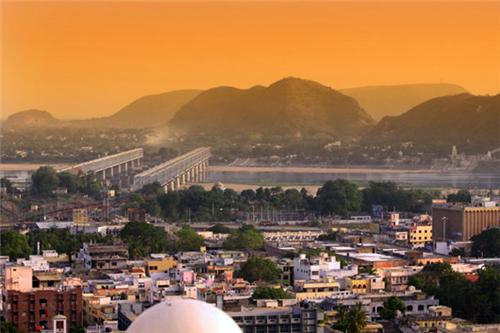 As the folklore in Mahabharata goes that Goddess Krishnaveni had asked Arjuna, the warrior prince, to make a passage for her to pass through and merge into the Bay of Bengal. Arjuna obliged her request by carving a hole through the mountains; quite apt with that story is the real trajectory of Krishna River. It passes through the city irrigating and providing a green cover to it. On the northern edge of Vijayawada lies the Badameru River and the western side of the city is flanked by Indrakiladri Hills. What makes Vijayawada apt for the lush agriculture is the abundance of water and the fertile soil in the area. The Prakasham Barrage has three major canals originating from it namely Bandar, Eluru, and Ryves from the northern side, which keeps the area well hydrated. On the southern side lies the Buckingham Canal that provides the necessary hydration to the soil.

Although Vijayawada is well endowed in terms of water supply throughout the city, it experiences scorching summers and was named as Blazewada by the British before Independence. Summers are marked by rising mercury levels and humidity in the air, this combination makes the city one of the hottest places in India. The excruciating heat is experienced in the months of April to June when the temperature can soar upto 50 degree Centigrade and humidity levels can rise upto 68%. Then comes the cool showers of monsoon which goes on from July to September. Vijayawada receives rains from both the South Western as well as the Northeastern winds and the total rainfall received is about 965mm every year. The winters in the city are mild and enjoyable which stretch from October to about February. Temperature usually oscillates between 10 to 30 degree Centigrade. The weather in the winter months is enjoyable and hence the city celebrates most of the festivals in these months.

The topography of Vijayawada is incomplete without a mention of the Kondapalli forest that lies towards the western outskirts of the city. Kondapalli Forest Reserve sprawls over an area of about 121.5 square kilometers, and provides the lush green cover to the city. This forest Reserve is home to wild animals like wild dogs, leopards, wild boar,  jackals, and wolves. The trees in the forest produce a rare soft wood which is used to carve Kondapalli Toys, a trinket you shouldn’t miss out on!

Vijayawada boasts of extremely fertile soil and agriculture is a major factor that fuels the economy of the city. The major crops of Vijayawada are sugarcane, rice and mango.