Vijayawada, or formerly known as Bezwada, has a rich legacy of history and mythological tales attached to it. The city of Bezwada finds mentions in the Stone Age relics found on the banks of Krishna River. The city in Andhra Pradesh has been a part of major dynasties and hence has witnessed dynamic changes and artistic evolutions over the past. 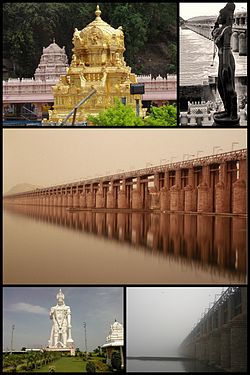 Mystery behind the name - Vijayawada

The most enticing story about Vijayawada is the origin of the name. In certain inscriptions, the name of VIjayavata is also prevalent. One of the legendary stories expounds that Arjuna, the warrior hero from the epic Mahabharata, prayed atop the Indrakiladri Hills, bordering Vijayawada, and was blessed by Lord Shiva and secured Pasupathastra from him. Another story which is worth mentioning is that of Goddess Durga, who after killing a demon rested here; as she was victorious (Vijaya)  in her endeavor, the place of her rest came to be known as Bezwada, and later as Vijayawada. Yet another tale is one with Arjuna and Goddess Krishnaveni, who requested Arjuna to make her a way to pass through the mountains and merge into the Bay of Bengal. Hence Arjuna paved a hole (Bejjam) for her through the hills which was known as Bejjamwada and later transformed to Bezwada.

Apart from the folklore, Vijayawada has been the seat of evolution of Buddhism and Hinduism. In 260 B.C. King Asoka had conquered the Kalinga Empire with Vijayawada being a part of it. In the year 208 A.D., King Chandra Sri Satakarni was the king ruling over Vijayawada. In the 5th and 6th Century, Vijayawada was a major center of Vishnukudin rulers. Mogalarajapuram caves were built in this area during their rule.

Era of Industrialization in Vijayawada

The first factory built in the city by the British East India Company in the 17th Century under the name Bezawadaapatam. In 1689, the forces of the Mughal king, Aurangzeb, occupied the factory. Finally a Dutch colony was established in the city by about 1735. As a matter of fact, the developmental phase of Vijayawada owes itself to the English occupation which also resulted in the extensive railway network Vijayawada enjoys today. The city finally turned into a British colony by 1765.  In a span of 100 years from then, the city turned into Bezwada Municipality which was the origin of the current Vijayawada Municipal Corporation. The first rail line through Vijayawada between Chennai to Kolkata, passing through Bezawadaapatam, started operating in 1904.

1930s was the period when Bezwada experienced explosive growth trajectory. It got its first private four vehicle registration in the 1935. Furthermore the first air taxi, owned by a German national, started operating from Bezwada in 1930s. The Vijayawada Port was established in this decade. And finally the first bank in the area, Imperial Bank, became operational in 1930s. By the time India achieved Independence, Vijayawada was a major commercial area in South India. In the year 1949, Scindia Shipyard became operational which later was re-named as Hindustan Shipyard. The construction of Prakasham Barrage was completed in 1959.