One of the defining features of Vijayawada is the influence of Goddess Durga on these lands. Temple of Kanaka Durga, also called the Sri Durga Malleswara Swami Temple is one the most illustrious places of worship in Vijayawada. Situated atop the Indrakiladri hills, the Kanaka Durga Temple is deemed to be the symbol of power, riches and virtue. The Kanaka Durga temple is the second largest temple in the state of Andhra Pradesh and no less in popularity as compared to Tirumala. 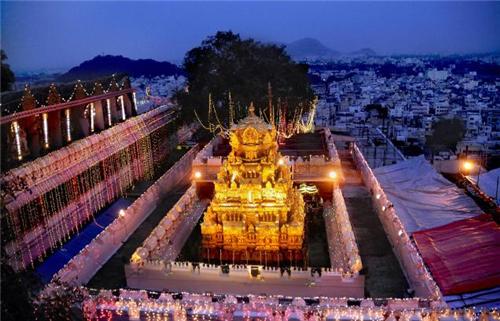 Kanaka Durga Temple, or the holy seat of Kanaka Durgamma, has an ancient history. It was built in the 8th Century by Mogalaya ruler Thanisha and was managed by his ministers’ minister Akkanna and Madanna from Kondapalli. This temple was also visited by Hiuen Tsang, the Chinese traveler. Kananka Durga Temple has inscriptions from various dynasties bearing witness to the old times.

The temple premises also house sub-temples of various deities.  On the north-east corner lie the temples of Lord Sri Malleswara swamyvaru and Sri Nataraja Swami temple and towards the north side of the main temple lies the temple dedicated to Sri Subrahmanyeswara Swami. Kanaka Durga temple is one of those rare temples which are supposed to be self-manifested, Swayanbhu.  Sri Sri Sri Sankara Bhagavatpadulu (Adi Shankaracharya) had visited the temple and installed the Sri Chakra at the feet of the Goddess.

Apart from the historical legacy, Kanaka Durga temple has plethora of folklore and spiritual beliefs attached to it. As per a legend, Krishna River was given passage by all hills and mountains in the area so that she could merge with the sea. When Indrakiladri Hill came in her way, all Gods requested the hill to make way for the mighty river Krishna, which the hill finally obliged to. However river Krishna took more space and also took a part of the hill with herself almost four miles downstream to Yanamalakuduru. This is known as Thelukonda or the Floating Hillock. Also as per another legend, Goddess Durga had once borrowed the nose ring from River Krishna and never returned it back. Hence the nose ring of Goddess Durga is never removed. As per the legend, River Krishna had taken a vow to raise its level to the top of the hill, where the temple is situated, in the Kalayuga era.

The temple is at its grandeur during the festival of Dussehra. The nine days of Navrathri are celebrated with great gusto and belief. The Goddess is decorated each of the nine days in different forms and attires which signify the different forms she takes. The different forms or Alankarams are Annapoorna, Mahishasuramardini, Balatripura Sundari, Maha Lakshmi, Lalitha Tripura Sundari, Gayathri, Saraswathi, Durga Devi, and Raja Rajeshwari Devi. On the day of Vijaya Dashami, all the deities are taken for a ride across the Krishna river in a swan shaped boat. The boat is intricately decorated with flowers and lights. This festival is known as the Theppostsavam. This festival holds great significance in the lives and hearts of the people of Vijayawada and shows the massive influence of Goddess Kanaka Durga on the lands of Vijayawada. 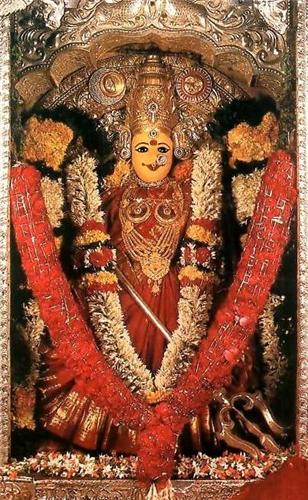 The temple has a system of performing sevas which can be daily, weekly or even on certain special occasions. Some of the facilities provide for life payments for performing pujas or some other religious ceremony. Other rites like threading ceremonies, naming ceremony, marriages are also allowed to be performed in the temple.

The temple is open for the devotees from 4 AM to 9 PM on all days. Only on Thursday, the temple is closed from 1PM to 5PM. For any further information or assistance, the temple has an administration which can be reached out to.