Vijayawada, literally translates to The Place of Victory, boasts of a dynamic cultural heritage and flourishing industry co-existing together. The first thing that comes to mind, when you hear the name Vijayawada, is the scenic beauty, illustrious history marked by the innumerable relics of past and the harmonious blend of religious beliefs apparent in sanctums of all religious faith in the same city. River Krishna marks the city with its presence and imparts most of the greenery to the city. 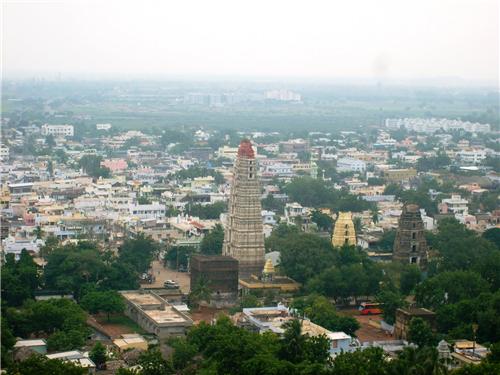 Vijayawada experiences notoriously scorching summers when the temperatures soar upto 47 degree centigrade. The ideal time to visit Vijayawada is the pleasantly mild winters which fall between December and February. Vijayawada is also a great choice for tourists during the months of October to March.

Vijayawada abounds in places to worship pertaining to all religious beliefs. The most likely reason for the abundance of religious places is the rich historical legacy this city has experienced since the Stone Age times. Speaking of temples, Vijayawada has the most popular Kanaka Durga Temple devoted to Goddess Durga, Pasupataastram Temple, Marakata Rajarajeshwari Temple, Sri Nagarala Sri Maha Lakshmi Ammavaru Temple, Subramanya Swami Temple and Sri Ramalingeswara Swami Vari Devasthanam. Around the city, there lies town of Mangalagiri also devoted to religious places worth visiting like the HInkar Tirtha Temple, devoted to Jainism. Vijayawada has the Gunadala Mata Shrine built in 1971. Also located at some distance is the town of Amaravathi which has exquisitely built Buddhist sculptures and is a major site of Buddhist worship in India. At the Hazarat Bal Mosque in Vijayawada a holy festival is celebrated every year which is a major attraction for people of all religion to join in.

As you enter the city you can’t miss the blend of modern constructions by the side of cultural heritage from the past. Here is a list of all the places without which a tour of Vijayawada is incomplete. Prakasham Barrage, the symbolic feature of Vijayawada, imparts the Venetian look to the city. Built in 1855, this structure seems like the main defining point of the town. Krishnaveni Mandapam, or more commonly known as the River Museum, holds an exhibition every year and also houses the Krishnamma Idol.Gandhi Hill which houses the Gandhi Memorial Library is a major tourist attraction. Victoria Museum and Amaravati Museum are the place to visit if you wish to bask in the relics of the past. Rajiv Gandhi Park also is a major tourist attraction in the city. 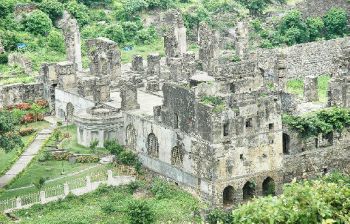 If you wish to spend the day close to nature and ancient cultural relics, Vijayawada has enough places to end up in your wish list. Undavalli Caves, located at a distance of 5 Kilometers from Vijayawada is a Buddhist sanctuary built in about 7 century AD. Mogalarajapuram caves, Kondapalli fort and Bhavani Island mark the city’s tryst with the past wherein the ancient rulers built several relics and which are preserved till today.

If you thought Vijayawada lacks in offering options for people to shop, then the city has a flourishing retail industry devoted to clothes shopping.  The Old City, also known as One Town, is the major center of garment trade in the city. The Vastralatha building in One Town is the hottest retail center for textiles in the city. Most of the clothes business is spread around the Besant Road and Governor Pet area. This area also houses some of the most renowned restaurants serving Western Cuisine in the city. If you are looking for more refined and exquisitely designed clothes, Bandar road houses innumerable shops to cater to your list.

Vijayawada may seem to be a city in the midst of explosive growth story but it has much more to offer to one and all. The elaborate past and the strong connectivity in terms of transportation have made the city a perfect combination of great culture and massive development. The city is at the height of its grandeur in the months of January and February when most of the festivities are celebrated and the weather makes it all the more enjoyable to savor the sights.